Ilurta is a village in Piraketi Tusheti. It was considered to be  a former village not long ago, though, fortunately, while being there we met  a few families and they had started building-restavration of ruins. In the centre of the village there is a church built in XIX century.      Young people living in Ilurta were facing a spring there. 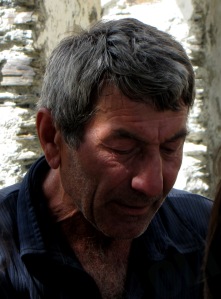 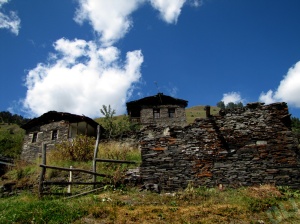 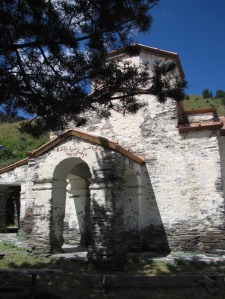 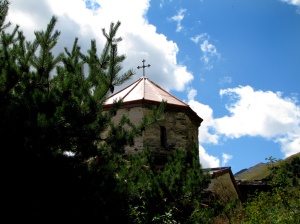 Unique books and other things are kept in the church and the local population take care of them with great attention.

Arkadi, who lives in Ilurta, was brewing with his other villagers. (Women aren’t allowed to enter the place.)

By September they will also leave Tusheti and move to lowlands.

People living in Ilurta  were gathering near the church and telling us legends about Tushs. Their dream was  the time, when Mtieli would return to the mountains to settle there.

“These slopes were covered with cornfield. There is no a single man in winter here,” they said.

Tourism  is going to be developed here. No other perspectives, elder people said. People in the past and today use wood to keep their houses warm.

“People grew wheat, potatoes. Wheat was only used on special holidays. People ate  rye bread.” Says a scientist Giorgi Tsotsanidze, who is in his home village and we met him by accident.

“In the past, taxes were gathered by the parochial. Generally, there were four communities in Tusheti. Later the parochial was joined and in the end there were 8 communities altogether. Tusheti was ruled democratically. “Tushs gathering” rulled the communities. Tushs called themselves Mountains. Gometsari, Chaghma, Pirikiti, Tsovata were called Khevi.

Khevis had their leaders. They had a place where they gathered when there were any problems to solve. For example, who go to the army or who defend the population and sheep.

Chanchakhovani is one of the parts of Chagma community. Ilurta and two other villages were called Khetsughurta, but it was a part of community. There are four villages in gaghma of Ivanaurta.

“When going to the army Tush warriors were dressed, on their way they took off their clothes and leave them at their horses. They called it raid. Tushs had  special battle traditions which were used against Shamili. While fighting against Persians, a Georgian fighter was holding a sword behind him. They fought bravely. In the beginning they attacked the enemy, then retreated. When the enemy followed them, they attacked again.,” Tells us a Tushetian scientis Giorgi Tsotsanidze.

Posted by ekofact on December 13, 2012 in Ecotourism