RSS
← Uflistsikhe
From Gori fortress to The Joseph Stalin Museum → 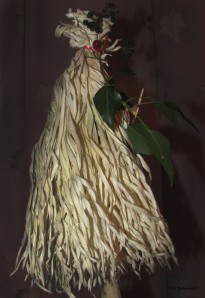 Georgian folk rituals of various parts of Georgia differ from each other.  People meet New Year differently in different parts of Georgia. December 31 in Racha is known as Kalandoba.  On that day one member of the family went to the forest to bring a sledge of wood at home. There were some Badzagari (evergreen tree with thorns) on the sledge. The sledge of wood was placed in the threshing-floor and faced the East. In the evening a pig was slaughtered (Sakalando Pig). Qada was baked in lard. It was called “Pig’s charm”. Before supper a boy or an elderly man of the family took a glass of wine to the pigsty to pray there: Let St. Basil grew pigs. They made a Gvergvi from cane, baked a big Lobiani-Qadiani in lard. A piece of Lobiani-qadiani was put on a Gvergvi with honey, apples and silver changes. Bread was baked the same amount as family members.People in Lechkhumi called the day Kalanda. Women didn’t do any work that day. A pig was slaughtered very early. Pig’s head was kept until Baptism Day in the attic. A man brought a sledge of wood full of Badzagari. They made a Chichilaki. Family Tabla was baked and some money and sweets were put on it. In Kalanda evening 6 family Tablas should be baked for family wellbeing and the seven bigger one for “pig’s charm”. The elder woman took pig’s Tabla, boiled liver and water to the pigsty and charmed away there with the words: God, save our pigs from danger. She poured the water away, cut the liver and ate it, then entered the house. All the members of the family ate a little piece of the liver. After the ritual, Family started family prayer. The elder woman took a trough full of Lobiani and bread and kneeled around the room three times and blessed the family. After supper Mekvle (first foot) took specially prepared things with him.

People in Kvemo Svaneti called the day Lidzienal.  In Zemo Svaneti-Ieshkhvam. On New Year’s Eve people went to the forest, cut trees and told fortunes when cutting a tree. They brought branches of nut-tree some moss and a white stone (as a symbol of cheese) home. Other main traditions were breakfast, secret prayers in which they mentioned Jgragi, Dali and etc. supper, ritual of seeking grains and then sowing them. Next day they baked New Year’s bread, Pork Lezomakhi, made Kupati and prepared special greetings for Mekvle and the bull and etc.

People in Samegrelo called the New Year’s Eve Lej-Khvama.  The elder member of the family made a Chichilaki, Special New Year’s greeting was prepared and was put on a trough. A bunch of flowers was made with Ivy and Nut-tree. Lejkhvama started at moonrise. People paid much attention on the moon and telling fortunes by moon.

In Imereti people made Chichilaki on New Year’s Eve. People brought evergreen trees at home. They put everything together on a trough. Before going to bed all the members of the family-youngs or olds, put a lump of sugar under the pillow. Families prepare New Year’s greeting on that day.

people in Guria called the day “Cut Tskhemli”. People collect Tskhemli wood for that day. They fed their hens well for 3-4 weeks and boiled them cold for that day. Early in the morning a pig was slaughtered, it was cut into pieces and boiled then. People bake Sakvakvavo for women on that day. They made Chichilaki. Special bread was baked for Chichilaki. Four big loaves of bread was baked for Basila. They started praying then.

Preparation for New Year’s Day started in East Georgia too. A housewife baked ritual bread -co-called “bediskveri” for all the members of the family. The bread had the shape of man, basila, for sons-stick, sickle, plough, plough-share and etc. For women the bread had the shape of braod-hen with chicks, a claw of a hen. Also bread-shapes were holes, pig’s breast, cow’s breast, birds with wings. Bread was baked for worms, vine, for dead people and etc. In Kartli a big pastille was baked for boys (kveri). They took the bread at the holy water blessing ceremony and ate them when returning home.

In the mountains pastilles were baked for all the members of the family. Also, pastilles were baked for bulls, cows, sheep, hens, first foot, water and for the olds (Mtiulet-Gudamayari). Some families baked special pastille for the first foot. In the middle of the pastille they put some butter and sugar. Bread and Butter meant abundance. Sugar meant sweetness (In khevi).  In Khevsureti first foot’s pastille was motley with a cross, a man, a plough, a cow, a horse and etc on it. In Pshavi a first foot was called Goga. If the bread was well-baked, it was a good sign. Otherwise it was a bad sign.

In Bari there were some eggs, cold boiled chicken, turkey, pig’s head, some Churchkhelas, Gozinakhi, apples, wine, vodka, Nazuki on the table. In Kartli, a bowl of  water was put on the table. There were a bowl of wine and a bowl of honey too. Big pieces of bread were put in them. It was called Abramiani in Kartli and Sakvlevari in Kakheti. Sometimes a bullet was placed on it too.

Main ritual in the mountains or in the lowlands of East Georgia was bringing wood. Besides fire wood they should bring a ritual tree.  In Kartli the tree was an oak tree and it was called a Satari.

In Mtiuleti a big tree was brought for the day. It was put in the middle of the fire and pastilles were baked on it by a housewife.

In Gudamakhari the tree was an ash-tree. It must be very clean.

That night in Khevi the young brought the branches of sweetbrier, cut them into small pieces and put them everywhere: in the feeding-rack, in flour, on the window-sills…The ritual was against the evil.

In the mountain an interesting ritual was performed for that day. In Gudamkhari, as well as other parts of Georgia, a bar of wood was put in the fire. If it sparkled it was a bad sign. If it burned well, it was a good sign. Before putting it in the fire some honey and butter was spread on the top, in the middle and in the bottom of it. A boy should sit over the bar (Bebera) and he must laugh. Then there was a dialogue with the housewife:

-The old is coming with his oldness!

Take a horse and his armour.

-What is the old saying?

He predicts having many cattle, well-being and happiness.

When it was getting dark in Ertso-Tianeti, a housewife of a Khevsurian family took Bebera out of the house and shout:

-The old are coming to and fro!

-What are they saying?-said somebody.

A child, sitting on Bebera, also wished wealth and happiness.

That night cows were tied up well. People believed that if they didn’t tied them up well, they would be lost in the woods and would be eaten by wolves. One member from all the families went to Khati as a first foot. In Phshavi they took a candle and Qada there. In Kopala people brought some slaughter to Khati. In Khevsureti People took some vodka and the same amount of candles as family male members.

When first foot went to Khati, He greated the Khati ar first and then entered inside. In Gergeti, a village of Khevi, there is a main St. Trinity church. People performed special rituals for that day. The archpriest of the church brought home-made Ckhreuls (little bread) to the church and gave people with his blessing. Ckhreuls were for the bulls to plough well that year. Gergetian and Stepantsmindian archpriests stayed at the church during the night. After supper and when a first foot went to khati they locked the door and nobody was allowed to enter or leave the house.

People tried to wear new and clean clothes on New Year’s Day. They tidied their houses, took their lent things back and met New Year’s Day in happiness and peacefulness.  At sunset the elder member of the family went out, brought some snow and threw to the first foot on his feet saying the words: Let this year be a year of peace, happiness, wellbeing and wealth. They drank some vodka. In Khevsureti the elder member of the family went out at sunrise and rang the bell. Then he gave some beer to the first foot. Sometimes first foot took some barbeque with beer from Khati. Sometimes in Phavi people slaughtered a wether brought by a first foot. A foreman (in Kopala) went to the spring. He took some bread and cheese with him and put them in the water. Then he brought some water which was blessed. While people were eating, a foreman said prayers for dead, especially he prayed for homeless. The feast lasted the whole night. Sometimes a family invited their neighbor especially a child. It meant an angel in the family.

In Tusheti when a housewife laid the table, she went to the cattle-shed and took “spring pastille” and a bowl of undrunk water, some sand, brought from the spring, some excrement of sheep and some manure with her. She rolled the pastille in the cattle-shed and said prayers in a low voice and threw other things inside, poured blessing water on the cattle, cut the pastille into two parts and gave to the cows.

Posted by ekofact on December 30, 2012 in Ecotourism

← Uflistsikhe
From Gori fortress to The Joseph Stalin Museum →