Diklo is located near Omalo, in Tusheti. A few families live there in summer. There you will have a great view of a rocky pine forest, where some endangered animals – Ounce and Wild Goat -are dwelling. 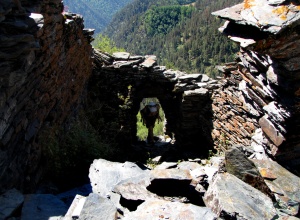 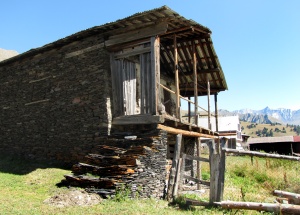 There are mineral spas near Diklo which is often visited by Tourists.

In the heart of Diklo there is a place of worship, where women aren’t allowed to enter. When we were in Diklo, ruins were being restored-reconstructed.

Near to the village Diklo, there is a Diklo fortress. A border checkpoint is nearby too.

When we were leaving Diklo, soon we noticed fortress-village in the top of the rocky mountain. It was Diklo ruins. These mossy rocks are the last witness of the tragedy happening in the early XIX. According to the legend 16 gunsmiths were defending the fortification for 18 days. The number of the enemy was 10 000. (Though historians say, that the number is exaggerated and the number of enemies was 4 000). The legend says that the battle was going on in their dead bodies.

The heroic story of Diklo goes from one generation to another. If you talk to the local shepherd, he will tell you about Ghvtiso Bequradze, who killed his fellow by the request of his wife. He didn’t want the woman either be captured or killed by enemy.

Posted by ekofact on January 18, 2013 in Ecotourism