RSS
← Changed the rules for logging, transportation and manufacturing
Leghvtakhevi →

Gudauri mountain ski resort is located on the south slope of the Caucasus Mountains. The trip from Tbilisi to Gudauri takes two hours. Ski season lasts from winter to spring.

In 1988 the first ski lift was built and after that the resort developed little by little. There are five ski lifts and many ski routs in Gudauri.  Nearly 16 km length rout works from 10.00 to 17.00 o’clock. Gudauri is recognized as a significant mountain-skiing resort. It has the most comfortable and technically developed infrastructure. Despite high prices Gudauri has many foreign visitors as well as locals. The slopes of Gudauri are completed above the tree line. The ski lifts are built by Austrian company Doppelmayr. . There are five lifts- three chairs lift, four chairs lift, five chairs lift and one Gondola. Gudauri contains several routs. The first lower station is at 1990 m above sea level and the last top station is at 3270 m called Sadzele. The length of the longest downhill run is 7 km.We were lucky to have plenty of sunshine. From Sadzele we could enjoy the breathtaking views of Glacier (Mkhinvari) on the left and Khevsurian Chaukhebi on the right.

It was terrible freezing at Sadzele, so we went to the cabin of rescuers. They made a fire and we got warm. But in the beginning of routs it was so hot that Ukrainians, Moldavians, Russians and other foreigner tourists were sunbathing. You can have hot tea, hot chocolate, coffee, whisky or beer. So tourists can have a comfortable holiday here. However, it would be better if there were toilets for the hikers between ski lifts.

Experienced rescuers are on patrol in Gudauri. They effectively help injured people. Bidzina Gujabidze, a well-known mount climber, is on patrol from Sadzele. He often helped people who were lost in the fog to find their way, or help traumatized skiers. During our visit he often watched the area with binoculars. He said that two days ago there ware ten cases of trauma.

Gudauri is an interesting place not only for skiing, but also for hang gliding. 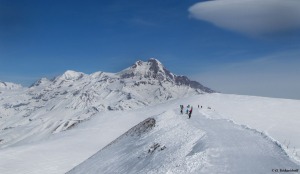 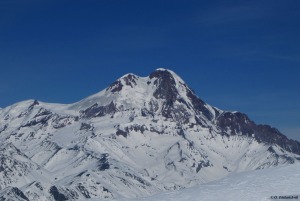 Posted by ekofact on February 13, 2013 in Ecotourism

← Changed the rules for logging, transportation and manufacturing
Leghvtakhevi →