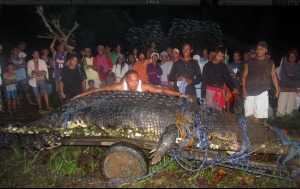 On Sunday the world’s largest crocodile died at the city Zoo Bunavan, Philippines. Crocodile’s nickname was Lolongi and it was in the Guinness world records as the largest crocodile in the world. Its length was-6.17 meters, and weight exceeded a ton.

According to the City Mayor Edwin Cox Elorde Lolongi was more than 50 years old, and his death could be caused by the unusually cold weather of the region. The crocodile was caught in 2011 during three-week hunt when it was suspected that the reptile attacked the locals. At least one person is known to be its victim. There is one disappeared person who is thought to be a victim of the reptile.

About one hundred people had to pull the crocodile out of the water. Lolongi became Bunavan attraction. “I loved the reptile, because he made our city popular” – said Elorde, the city mayor. An EcoPark was built specially for the reptile- tourists could also enter there. The City Mayor said that the profit increased with 72 thousand dollars after building the EcoPark.

It is said that there are as big crocodiles as Lolongi around Bunavan which are dangerous for locals as well as for tourists.

One response to “The world’s largest crocodile died in Philippines”